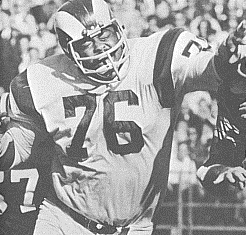 On July 8, 1963 the New York Giants traded away one of the stalwart members of their defensive line by dealing DT Roosevelt “Rosey” Grier to the Los Angeles Rams for DT John LoVetere and a future draft pick.

The 6’5”, 290-pound Grier had been chosen by the Giants in the third round of the 1955 NFL draft out of Penn State. Except for the 1957 season, which he missed due to military service, Grier was part of an outstanding unit that included DT Dick Modzelewski and ends Andy Robustelli and Jim Katcavage. He was a two-time Pro Bowl selection, received consensus first-team All-NFL honors in 1956, and gained at least some first- or second-team recognition after four other seasons. In 1962 Grier was an All-Eastern Conference choice by The Sporting News. Over the same course of time, the Giants consistently contended and won a NFL Championship while topping the Eastern Conference on five occasions. The tough and cohesive defense played a significant role in the club’s success.

However, there were concerns about age and the need for retooling. “At 31, Grier is about four years older than LoVetere,” explained New York’s Head Coach Allie Sherman. Sherman also expressed the desire to use the draft choice obtained from the Rams in dealing for a veteran running back, which failed to materialize (it ended up being a fourth-round choice in 1964 that was used to take Ohio State FB Matt Snell, who chose to sign with New York’s AFL club, the Jets).

In Los Angeles, Grier was reunited with a former Giants teammate, Harland Svare, who was now commencing his first full season as head coach of the Rams. He moved directly into the starting lineup alongside second-year DT Merlin Olsen and flanked by ends Dave “Deacon” Jones, in his third season, and Lamar Lundy, a 28-year-old veteran, putting Grier as the senior member in the midst of another formidable unit. But the remainder of the defense, while containing some good young players, was not so impressive, nor was the offense, and the team as a whole was coming off of a miserable 1-12-1 record in 1962, its fourth straight under .500. Svare had been promoted to head coach during the season.

The club improved to 5-9 in ’63 and the line, now containing Grier, remained the best part of the defense and led the NFL in allowing the fewest rushing yards in 1964, although the Rams finished once more with a losing record. Yet another disappointing year in ’65, in which Grier was beginning to show his age at 33 but was also still tough against the run, led to the dismissal of Svare and the hiring of George Allen, who had been an outstanding defensive coach with the Bears.

Under Allen’s guidance, the Rams improved to 8-6 in 1966 and were poised for further improvement. However, Grier went down with a torn Achilles tendon in the preseason that cost him the entire year and DT Roger Brown was obtained from Detroit to fill his place. LA went on to reach the postseason for the first time since 1955 with a gaudy 11-1-2 mark in ’67, and the “Fearsome Foursome” of Jones, Olsen, Brown, and Lundy played a key role in the success.

While it was anticipated that Grier would return to the Rams in 1968, he announced his retirement in July, moving on to a full-time entertainment career. Over the course of 11 seasons in the NFL, four with the Rams, he appeared in 141 regular season games and was a solid contributor to excellent defensive lines with two clubs. While sacks were not yet an officially-compiled statistic, Grier has been unofficially credited with 21 during his four active years with the Rams, with a high of seven in 1966. 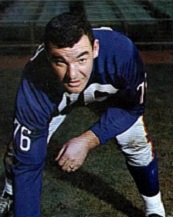 As for the player the Giants obtained for Grier, the 27-year-old LoVetere (pictured at left), who was 6’4” and weighed 285 pounds, attended Compton Junior College but didn’t play football collegiately although he did play with distinction in the service for two years and was signed by the Rams in 1959. An early proponent of weight training, he was both strong and fast. LoVetere performed well, and in 1960 blocked five kicks, but ran afoul of Svare’s predecessor, Bob Waterfield, and lost his starting job.

LoVetere settled into Grier’s spot in the defensive line (he even wore the same number 76) and was named to the Pro Bowl as the Giants won a third consecutive Eastern Conference title in 1963. However, time finally caught up with the club and the bottom dropped out in ’64. It caught up to LoVetere as well, who appeared in just 12 games combined in 1964 and ’65 due to, first, a broken leg and then a knee injury that required surgery and proved to be career-ending.
Keith Yowell at 10:40 AM